They build expensive glamorous sets, don’t they! It’s like the wedding dress; the woman spends big time money to wear that dress just for a few hours! 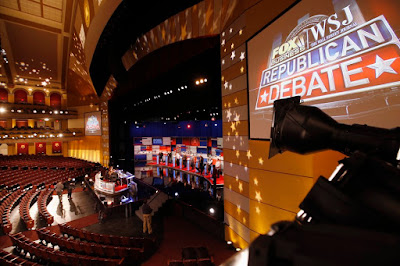 It will be held in Milwaukee, WI, not the wedding, but the debate. No single candidate has emerged as the leader from the earlier debates, and I don’t see an improvement this time either.
The mistake media has made is to put everyone on the stage, 10 of them; last time Trump got a total of 9 Minutes in the 2 hours debate, others got 8 minutes or less. Instead, if they choose the top 3, each one will get at least 20-35 minutes to tell us who they are.
If the candidates have not made it to the top 3 this far out in to the campaign, they should not hog the time from the legitimate others.
In my view the top 3 should be: Trump, Carson and Rubio. All others have to go back and earn their spot, and may be if they can crawl back up with the numbers, they could be included in the 4th round of debates.
Carson will not make it in the end; he lives under a halo or something and continues to cook up unverifiable stories about his youth. Trump is good on shutting others up in a hurry, but do we need that kind of President who would not listen to any one? Personally, I would have preferred another brash guy, but at least he makes sense; Chris Christie. I am not sure about Rubio; he is dilly dallying on issues.
I think Trump would be the nominee competing with Hillary on the other side. What do you think?
www.TheGhouseDiary.com

Dr. Mike Ghouse is a community consultant, social scientist, thinker, writer and a speaker on Pluralism, Interfaith, Islam, politics, human rights, foreign policy and building cohesive societies. Mike offers pluralistic solutions on issues of the day. More about him in 63 links at www.MikeGhouse.net and his writings are at TheGhousediary.com
Posted by Mike Ghouse at 1:52 PM