The Good news as of this morning, Thursday, October 17, 2013, the US Government is back in business.  Thank God for my fellow Republicans – the ranking ones like John McCain, Mitch McConnel and a whole lot of them for taking the action. Its a victory to Obama and victory to a majority of Americans for what he represents; Americans!  I have told Republicans to speak up against the extremists among us, I am glad they finally did. 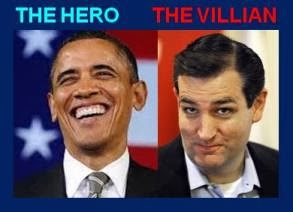 Ted Cruz is the villain of our nation, and the villain of the ordinary Americans. He persisted because good Republicans did nothing about his evil designs. Finally an unprecedented thing happened - 88 out of 100 Senators have passed the bill, still 12 of them did not approve, and that is OK, that is how democracies function, at least some opposition is needed. As long as the majority is sensible and cares about America, we can move forward.

Ted screwed the Republican Party,  “his act cannot be approved by conservative Republicans either, who prefer stability over chaos, and are disciplined enough to follow a system. That is how democracies work.”  John McCain has rightly called them Wacko birds.

The stupidity in my party is that a majority of them are goats, sheep, and conformists. No one has the balls to stand up against a handful of bullies – now we have learned the lesson. But it’s going to cost the house in 2014. I am afraid my favorite congressman Pete Sessions will be gone, is there any moderate Republican out there to take his place?

These two are good for now.

Mike Ghouse is a speaker on Pluralism and offers pluralistic solution on issues of the day.  He is a moderate Republican committed to speak up against the tyranny of the extremists among the Republicans.
Posted by Mike Ghouse at 6:16 AM