Senator Graham was told to shut up by Senator Feinstein


Fellow Republicans,
If you are the ones with your head buried in the sand, take it out. It is embarrassing to see Republicans are making a laughing stock of themselves.
Senator Graham, a fellow Republican is making an ass of himself, we the Republicans need to ask him to shut up as well, he is going to drown the GOP with his idiotic line of questioning.  If we don't do it, it is one more nail in our coffin.

May be this is self-deportation at works in 2014.  Any Democract can win against this man.
Same thing with that loser McCain.
http://www.nbcnews.com/id/3036697/ns/msnbc_tv-hardball_with_chris_matthews/#50979514 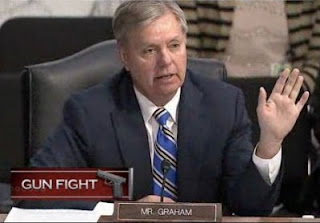 Mike Ghouse, a moderate Republican who cares about the America and a strony two party system and believes in speaking up when things are wrong.